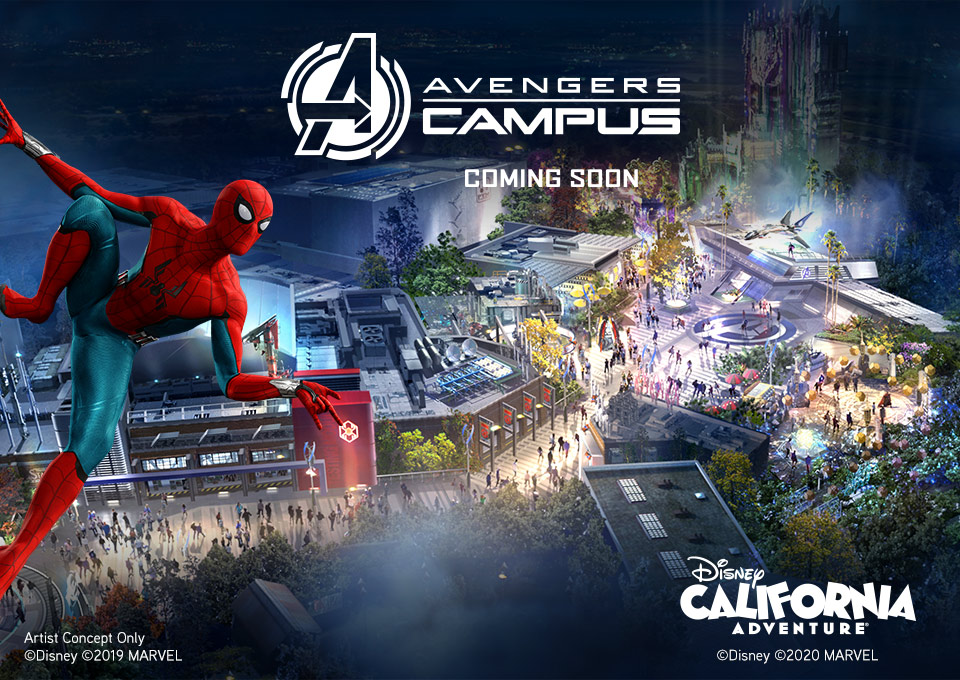 Welcome to Avengers Campus: dedicated to discovering, recruiting and inspiring the next generation of Super Heroes.

You can team up with your family and friends and train with the Avengers to take on whatever the universe throws at you. Earth’s Mightiest Heroes are calling you to assemble and live your Super Hero dreams in this fully immersive land.

At Avengers Campus, you’ll find a collection of attractions, encounters and missions—each dedicated to a different experience—where you and your crew will team up with some favorite Super Heroes! Head to the family-friendly WEB SLINGERS: A SpiderMan Adventure where you can put your web-slinging skills to the test.

Team up with Spidey and help capture out-of-control Spider-Bots before they wreak havoc on the campus. Then charge over to Guardians of the Galaxy — Mission: BREAKOUT! and help Rocket rescue the Guardians from The Collector’s Fortress.

Witness the gravity-defying feats of Spider-Man in a way you’ve never seen before. Learn the secrets of the mystic arts from Doctor Strange himself when you explore the ancient Sanctum and magical artifacts that pulse with mystical energy. Train with Black Panther and Wakanda’s elite guards, the Dora Milaje, or get caught up in the action as the Avengers team up to defend the campus against menacing villains.

Swing on over to WEB Suppliers and pick up the latest inventions and prototypes, including Spider-Bots and other tech projects to tinker with at home. Power up at the Campus Supply Pod with official Avengers Campus gear.

And when it’s time to take a break from all your heroics, savor a meal and even some tiny treats at the Pym Test Kitchen, where researchers are using Pym Technology’s growing and shrinking tech to create new innovations in food science. Anyone hungry for knowledge—or just hungry—is invited to help the Pym team with their food research by taste-testing their delectable meals.

So come on, let’s team up with Earth’s Mightiest Heroes. Let’s go to a place where you can encounter Iron Man, Captain Marvel, Spider-Man, Thor, Black Widow, Ant-Man, The Wasp, Doctor Strange, Black Panther, the Dora Milaje, the Guardians of the Galaxy and more. Let’s find the hero within all of us and go to Avengers Campus at Disney California Adventure® Park.